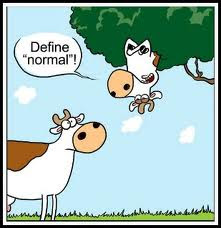 I was chatting with Madam Lash recently about how much things have changed for me, and she talked about how the choices I'm making, and she said "making these (better) choices is becoming your new normal".

It's only 3 little words, but words have power, and these words say so much about where I was and where I am today. 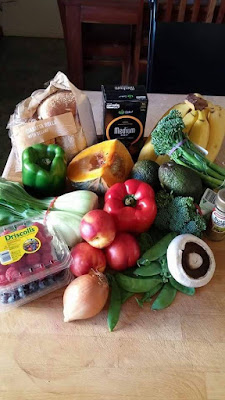 Normal used to be a shopping trolley full of packages - vacuum sealed bags, colourful boxes, foil wrapped 'treats', bags of frozen chips and vegetables... you get the idea.  To me, that's how food came, even though I am of a generation that remembers a time when family meals were cooked from scratch every night, and having take-away for tea meant that you had to go out to get it, and it was a pretty rare event.

My new normal is a shopping trolley that looks like an ad for a farmers market, with as little packaging as possible.

Normal used to be  and this is after my kids grew up  sleeping in Every. Single. Day.  Now, when I say 'sleep in' I don't mean getting up at 8am instead of 7am.  I'm talking sleep-ins of the more epic variety.  Lets just say that 11am was not unheard of...  Mind you I'd be up until 2am or 3 am before heading to bed so it was still only the prescribed 8 hours...

Also, Nanna Naps and I were on a first name basis.

My new normal is a sleep pattern  which is still a work in progress  that has me in bed by 11pm most nights, sometimes earlier, and up at 6am three or four mornings a week, and no Nanna Naps!

Normal used to be skipping breakfast, having lunch sometimes as late as 3pm, snacking on junk food during the afternoon and evening, having dinner around 7.30pm, then eating more crap.  It would be having take-away food for lunch every day when BM was on his days off, it would be Dominos pizza for tea every payday, as well as take-away Chinese food around once a fortnight, McDonald's several times a week, and super sized portions of pretty much everything because I had portion distortion so bad that a normal sized serve of anything actually frightened me. 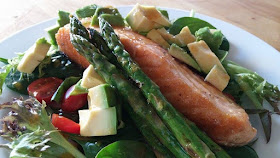 My new normal is, for the most part, three meals a day, whether I want to eat or not. It's making lunch at home most days, and if we're going to be out it's looking for a cafe that serves real food, rather than grabbing McDonald's and eating it in the car. Take-away is a treat now instead of a normal go-to option.  Even the type of take-away is different!  No more fat filled pizzas or bland, beige Chinese food, now it's lovely fresh Thai with masses of veges, awesome colour, and so many flavours!

Normal used to be literally sitting down all day except to go to the bathroom or the pantry for more crap.  It was waiting for people to walk past me so I could ask them to do things so I didn't have to get up.  It was actually being unable to simply stand up, it was a process.  It was being unable to walk to the letterbox without breaking a sweat.  It was pretty much going from the bed to the couch and then back.  Every. Single. Day. 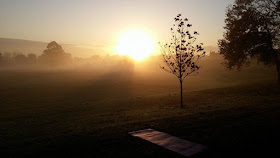 My new normal is looking for ways to move.  It's going to #crackofarse training twice a week, and Frozen Yoga on a Friday morning at OH GOD o'clock.  It's going for a 2km or more walk before a PT session just to warm up.  It's signing up for Fun Runs, and going to parkrun.  It's enjoying movement and exercise, and it's being one of those crazy people who actually loves to exercise, and who looks forward to it!

My new normal is me ignoring Voice.  It's me countering every negative statement that issues forth from Voice with a positive one of my own.  It's me accepting that I've made mistakes, and that its okay.  It's me accepting that I am deserving, that I am well loved by so many people, and BM assures me that I do in fact, come in handy! Voice is a part of me that will always be there, I know that, but I have chosen to starve it of it's power over me. 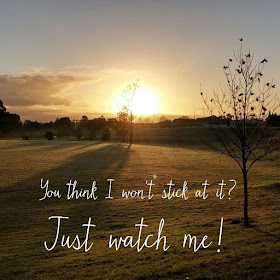 What is your new normal?